Networks of roots: Greatly appreciate your 'relationships' conception' of self (which I see somehow very postmodern, in the sociology of knowledge), and even an expression of us living in the Information Age and virtual worlds (in this "Information Technology and the Network Society" course), Interdisciplinary conversation with Philosophy First some definitions and quotes, All to explore our own conceptions of self in the information age, as well as key ideas and analyses and data in our 'textbook' "Networked," such as 'individualism' for the purpose of studying aspects of the "Network Society" (per Castells):

I greatly appreciate your 'relationships' conception' of self (see below - which I see somehow as very postmodern, in the sociology of knowledge), and even an expression of us living in the Information Age and virtual worlds (in this "Information Technology and the Network Society" course). First some definitions and quotes, and then further conversation about what you've written perhaps in another email, - all to explore our own conceptions of 'self' in the information age, as well as key ideas and analyses and data in our 'textbook' "Networked: The New Social Operating System," such as 'individualism,' - for the purpose of studying, and learning about, aspects of the "Network Society" (per Castells):

'only the individual can be a proper accounting unit'

("Have the bad boys of Caracas, or elsewhere, understood faster than the rest of us what our new society is all about? Is the new gang identity the culture of communal hyper-individualism? Individualism because, in a pattern of immediate gratification, only the individual can be a proper accounting unit (italics mine). Communalism because, for this hyper-individualism to be an identity - that is, to be socialized as value not just as senseless consumption - it needs a milieu of appreciation and reciprocal support: a commune, as in White's time, it is a commune of the end of time, it is a commune of timeless time, characterizing the network society. And it exists, and explodes, territorially. Local cultures of urgency are the reverse expression of global timelessness" (from Castells' book "The Power of Identity" Vol. II, 2004, New Edition pp 67-68)).

"individualism and anti-individualism. Theses in philosophy of mind advocating opposed conceptions of the psychological subject.

The individualist conceives the psychological facts about a person as facts which hold independently of her relation to her physical and social environment. Pressure is put on the conception by the claims (i) that some mental states are world-involving, (ii) that some mental state are linguistic-community-involving. ... "
http://www.oxfordreference.com/view/10.1093/acref/9780199264797.001.0001/acref-9780199264797-e-1214?rskey=Sf8ADA&result=1214

"nirvana. In *Buddhist philosophy, the blowing out of the flame of the self. Hence the end of all suffering - by living without craving or by dying never to be reborn. Commonly understood a pure extinction, it is described by some Buddhist scriptures as a positive state of perpetual peace. 'Since the self, strictly speaking, does not exist anyway, who enjoys this permanent painlessness?" Is it real - since nothing real can be permanent?' These remain questions to be answered by silence."
http://www.oxfordreference.com/view/10.1093/oi/authority.20110803100235330

"self. The term 'self' is often used interchangeably with *'person', though usually with more emphasis on the 'inner', or psychological, dimension of personality than on outward bodily form. Thus a self is conceived to be a subject of consciousness, a being capable of thought and experience and able to engage in deliberative action. More crucially, a self must have a capacity for *self-consciousness, which partly explians the aptness of the term 'self'. Thus a self is a being that is able to entertain first person thoughts.

A first-person thought is one whose apt expression in language requires the use of the first-person pronoun 'I', or some equivalent *indexical expression. ... "

"society. A set of individuals and / or institutions in relations governed by practical interdependence, convention, and perhaps law - which relations may vary from the local to the international. The modern concept emerged in later eighteenth-century Europe (in arguments against absolutism and civic republicanism) to denote a supposed sphere of causal and moral self-sufficiently lying between the political and the personal. The concept was the ground for the new 'science' of 'sociology'. It later came to be used more loosely to include the political and the personal. Many *liberalisms have resisted the idea of 'the social', preferring to see individuals as self-sufficient. Some philosophers, however, including Williams and Rawls, as well as some critics of liberalism, like MacIntyre, have recently reasserted conceptions of the social as the ground of moral possibility and moral judgement."

In the interest of an interdisciplinary conversation, these entries are all from "The Oxford Companion to Philosophy" (2005 new edition, printed version) and edited by Ted Honderich. I include the nirvana definition with its Buddhist conception of self, because I don't think that's what any of us (?) are referring to, especially in reference to the book "Networked."

I see the book and research in "Networked" as coming into conversation with Castells' research, and a body of questions some sociologists have been asking for around at least 2 decades now, about the internet, especially concerning the internet as alienating, and questions about the internet and individual choice or agency in the information age (which we'll get to in later 2nd hour talks this autumn, as well as in "Networked," with data and social theory), and especially in terms of data. The discipline of social science has often posited that capitalism, including global information capitalism now, is a condition giving rise to alienation with no agency (Marx et al, forward). And, similarly, Bio-power or (archaeologies of knowledge) and discourse (Foucault et al.) creates kinds of subjectivity where agency or choice also isn't relevant. Both Castells, who actively theorizes about conceptions of the individual and agency, as well as the term "individualism," and Rainie and Wellman's data seem to be sound, methodological framings of social science questions, and good  research (e.g. Rainie's surveys at Pew, with large sample sizes) as responses to these ongoing conversations.

Everyone, what other questions about the first chapter of "Networked" and vis-a-vis everyone's own research, do you have?

Please read chapter 2 (and 1 if you haven't finished it) for Thursday, with a new thread to come about this.

The more we can engage these course conversations actively - and by writing, perhaps - the more interesting learning is, I'd suggest here.

Greatly appreciating, James, your not seeing "Thus, I simply do not see any Individual, yet alone a Networked one.  What I see is a new level of networked connectivity such that my parts (subnetworks) interconnect with other's parts (subnetworks) more freely". What do other people think for yourselves, and vis-a-vis the first chapter in "Networked," especially in terms of studying effects of the information age, and knowledge 'about' this, and concerning "individualism" and "self".

On a personal note, while I don't resonate with the theoretical framing in "Networked" in the same way I do with Manuel Castells' social theory, thinking, writing, speaking, research and theoretical framings - and especially on a feeling level (Castells is far-reaching in his thinking and theorizing about the information age, and this feels good to me, even fascinating and captivating - and Castells explicitly recognizes the significance of students' feelings about learning social science; see - http://globetrotter.berkeley.edu/people/Castells/) - I do appreciate Rainie and Wellman's approaches to generating data and then trying to scaffold a theory/theories around it.

"Perhaps it would help if we spend some time on the sociology of knowledge here.  In particular how the notion of self is created and supported in the under-connected world.  (Having some difficulty here finding useful terms here.  I'd say non-networked, but this is technically incorrect.)  It seems to me there is a reliance in fact-to-face communication upon reifying and non-informational codings.  The nod of a head, or a glance down a dress.  It seems to me the notion of individual as used by Rainie and Wellman is rooted in this particular "real world."  I don't think the face-to-face "real world" does a very good job of mapping to the highly-connected world.  A glance down a dress in the Metaverse carries several degrees of freedom not obtainable in the "real world"

Sphere is neither an individual nor a society.  Sphere is a persona.  Jim also is a persona.  The two have much in common, but they are also in some ways very distinct.  Sphere and Jim are facets within a network.  A subnetwork of the global network which you would usually call a person.  Nowhere here do I see an individual.  I see Sphere doing Sphere's things in SL, and Dharma doing Dharma's things in OpenSim Grid.  ANd Jim doing Jim's things at the computer.  None are separate, but none are really the same either.

Thus, I simply do not see any Individual, yet alone a Networked one.  What I see is a new level of networked connectivity such that my parts (subnetworks) interconnect with other's parts (subnetworks) more freely.  I see a breakdown of the gatekeeper society and its replacement with a higher order of connectivity with greater degrees of freedom.  I don't find the society verses individual model persuasive as a description for what is emerging.

People talk about how much of themselves they now keep online.  This is more than metaphor.  This is what to expect if civilization is not to simply collapse. 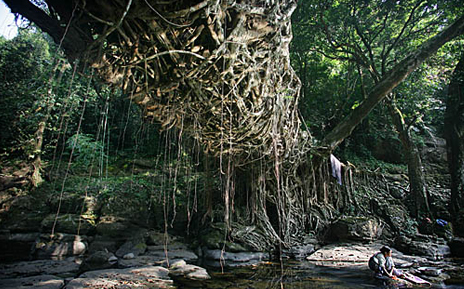