I've added recordings of Amazing Grace and Scotland the Brave that I just made after our lesson to my piping web page here: http://scottmacleod.com/piping.htm. 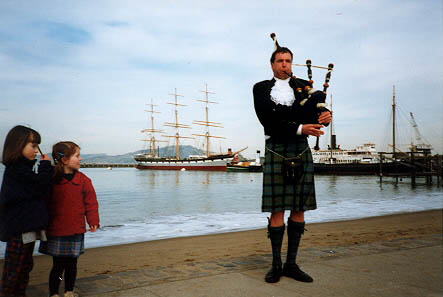 Their URLs are also:

While I'm glad to have these recordings up on my website with an in-tune instrument, it's time to move outside when the flowers / azaleas are blooming for recording and for a different relationship to the mic / computer, sound-wise, as well as perhaps shut the curtains, and wear my kilt.

Good to have this feedback loop of recording working with an in tune instrument as well, - thanks to you - for learning's sake ... and it's all so easy with G+ Hangouts and Youtube!

Here's a Fettes College pupil's web page of mine from 1976-1977 when I lived in Edinburgh, with mention of my piping there - http://www.fettes.com/fettes-people/past-pupils/gordon-macleod/ - as well as a blog entry of mine about this, and which also has a Willie Morrison interview and Donald MacPherson piping - http://scott-macleod.blogspot.com/2013/02/red-cuillin-isle-of-skye-my-new-fettes.html .

On with musicality, building stamina and bliss through piping :)

The Battle of the Pass of Crieff

Lament For The Viscount of Dundee

The End of the Great Bridge

with growing resources, and for open teaching and learning.